An irregular balance of the hormones linked with reproductive health in one or both partners can rather make conception as well as pregnancy difficult. Hormonal imbalances happen to be the leading cause of infertility in women but are often treatable with lifestyle changes as well as medications. Trying out female infertility treatment in Hyderabad is way out for positive pregnancy results.

Hormonal imbalance happens to be treatable and needs to be treated whether or not the patient is hoping to be pregnant. Treatments for hormonal imbalance can include medications to restore normal thyroid function, normalize hormone levels, induce ovulation or even trigger a fully mature egg.

Hormonal imbalances happen to be the leading cause of infertility in women. Disorders, such as polycystic ovary syndrome (PCOS) and anovulation, can be due to a hormone imbalance in women. Men may also suffer from hormonal disorders that do affect their fertility, such as low testosterone levels.

This is one of the commonest causes of infertility and patients have multiple small cysts in their respective ovaries that occur when the regular changes of a normal menstrual cycle get disrupted. The ovary is enlarged, and it does produce excessive amounts of androgen as well as estrogenic hormones.

Polycystic ovary syndrome (PCOS), also referred to as hyper-androgenic anovulation (HA), or Stein–Leventhal syndrome, has a set of symptoms caused due to a hormone imbalance in women. 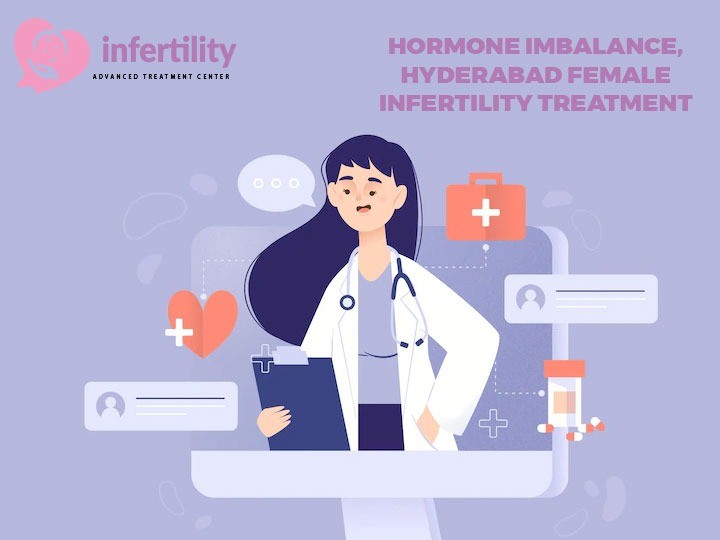 Signs and symptoms of PCOS:

The primary treatment meant for PCOS does include lifestyle changes, medications, as well as surgery.

Where PCOS is due to overweight or obesity, successful weight loss helps to restore normal ovulation/menstruation; but several women find it very difficult to achieve as well as sustain significant weight loss.

Medications for PCOS are oral contraceptives and Metformin etc. Oral contraceptives tend to increase sex hormone-binding globulin production, which means enhancing the binding of free testosterone. This does reduce the symptoms of hirsutism caused on account of high testosterone and also regulates the return to normal menstrual periods. Metformin is a medication commonly made used in type-2 Diabetes to reduce insulin resistance and is also made used to treat insulin resistance seen in PCOS. In several cases, Metformin also supports ovarian function and returning to normal ovulation.  Such treatment can be had at infertility treatment hospitals in Hyderabad.

Not all women suffering from PCOS have difficulty becoming pregnant. For those that do, anovulation or infrequent ovulation happens to be a common cause. Other factors do include changed levels of gonadotropins, hyperandrogenemia as well as hyperinsulinemia. Similar to women without PCOS, women with PCOS that are ovulating may also be infertile due to other causes such as tubal blockages due to a history of sexually transmitted diseases.

PCOS has no permanent cure. Treatment for PCOS does involve lifestyle changes such as weight loss as well as exercise. Birth control pills are made used of to help in regularizing periods, excess hair, and acne.